Another great story of a couple locking their love on a bridge to show their affection. Way to go Karl!  We LOVE it…

Karl Christofferson doesn’t need a holiday, anniversary or special event to demonstrate his affection for the lady in his life.Last month, Christofferson, of Milwaukee, showed up at girlfriend Vickie Hendrikse’s Sheboygan home with a padlock and an idea to fasten it on a Sheboygan bridge as a symbol of their love, just as the pair had seen done in Paris. 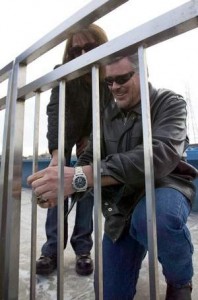 Karl Christofferson and Vickie Hendrikse attach a padlock to the Eighth Street bridge, then they threw the key into the Sheboygan River. / Photo by Bruce Halmo/Sheboygan Press Media