Lora…thanks for sharing your wonderful LoveLock experience.   Here’s what she said…”We placed the lock there on July 27th 2012 – the same day as the opening ceremony of the Olympics and the afternoon that the Olympic flame made its procession down the Thames. I surprised my girlfriend with the lock and it was a really lovely experience for us both (as you can see in the pictures, she’s close to tears; she later said that she thought that I was going to ask her to marry me!).  We’ve heard reports that London councils aren’t too happy about the locks being there – I know there has been a lot on there, but ours was the only one we could see when we placed ours. However the knowledge that we put it there, that we locked it in place together, and that we created that memory is enough to survive even if the lock itself doesn’t.” 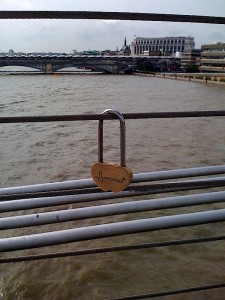