Lovers put a lock on it over Corktown Bridge

OTTAWA — Katie Williams didn’t notice the rusty gold padlocks fastened to the pedestrian bridge that runs over the Rideau Canal. Smiling with her new husband, Jean-François Genest, Williams was busy enjoying the final photo-shoot of her wedding day.

Stephen Smith, the couple’s friend and wedding photographer, paused between shots and presented his friends with a small box. Inside, the newlyweds found an engraved silver padlock.

“We were both so surprised because we hadn’t heard of (it) before,” Williams says.

The tradition wherein lovers fasten a padlock to a bridge or other permanent structure and then dispose of the key, representing an everlasting commitment, is believed to have originated in China. But the practice gained renown in Rome in recent years after Italian novelist Federico Moccia wrote in his 2006 book I Need You about a couple attaching a lock to the third lamp post of Milvian Bridge. The “love locks” have become a common sight on bridges, fences, and poles in cities across Europe, North America and Asia — and now they are here in Ottawa, as well. 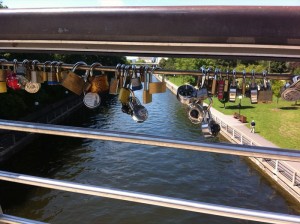 My favorite part of this article is this…

William and Genest’s padlock is in the middle of the bunch. Their silver lock is one of the biggest, but is no longer rust-free. The chemical reaction is inevitable and found on the majority of love locks around the world.

And yet, the piece of metal, locked in through every weather, stands as a global symbol of a couple’s untarnished love.