More Places to “lock your love.”

Traveling?  Some great information on other places to “lock your love”.

Austria.   A pedestrian bridge in Salzburg with a beautiful view through the city.

The Makartsteg is a bridge over the Salzach River in Salzburg’s city centre. It was named after the 19th century Historicist painter Hans Makart, who was born and raised in Salzburg. Makart became famous as a painter of the Viennese Historicism, providing artwork for many of the pompous buildings of the Ringstraße.

Passerelle Léopold-Sédar-Senghor, formerly known as passerelle Solférino (or pont de Solférino), is a footbridge over the River Seine in the VIIe arrondissement of Paris. This bridge was built in 1999, replacing the existing bridge. 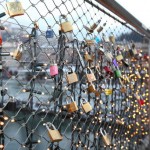 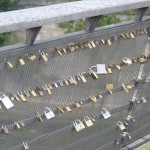