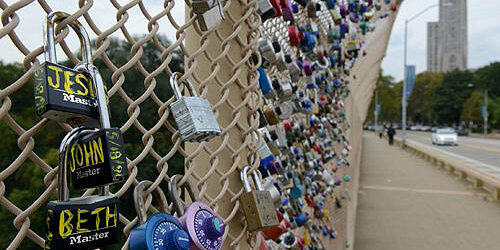 LoveLocks are again making the news…calling out to couples, families and friends.   The artful display love padlocks that are engraved with special messages are screaming HELLO!

As thousands of fans streamed across the Roberto Clemente Bridge Tuesday night before the Pirates wild card game against the Cincinnati Reds, their eyes were fixed on the bright lights of PNC Park, lit up for its debut as a venue for postseason baseball.

In all the excitement, hardly anyone stopped to examine the dozens of padlocks that have been attached to the bridge’s fencing, many inscribed with the names of couples who, as part of a trend popularized by an Italian youth romance author, attach the locks as a symbol of their undying affection and toss the keys into the water below.

The locks have been embraced by couples looking for new ways to memorialize their commitments, said Debbie Peysar, a former wedding planner whose Hurricane, Utah-based company, Lovelocks Inc., sells custom locks as well as “lovescapes,” separate structures that allow locks to be displayed without damaging or defacing property.

The lovescapes — like the 10-by-10-foot dream catcher installed at Zion National Park in Utah, Ms. Peysar said — were intended to preempt the lovelock backlash that has sprung up in cities like Venice, where the La Nuova newspaper reported in August on citizens declaring a “Bolt Cutter Day” to remove the locks.

The company also sells custom locks with no keys to make the practice more environmentally friendly.

“I think people are always looking for different ways to be creative with their relationships,” Ms. Peysar said. “It’s kind of like carving your initials in a tree.” 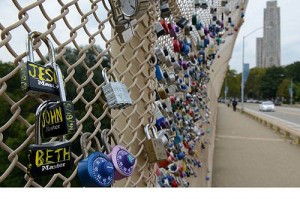