This is the home of Juliet.  Romeo’s Juliet and the famous balcony.  Well, that is what many people believe but the only connection is in fact the house was once owned by the Cappello family, who may have been the model for the Capulets of Romeo and Juliet.  For now, lovers around the world flock to put love letters and love locks on the house.  There isn’t much space left and you might have a hard time finding a free spot to lock your love. 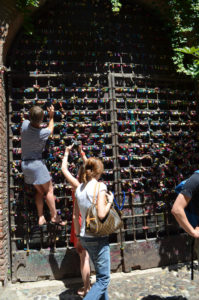 Located on Avenida 18 de Julio, this fountain has placed a large plaque that reads; The legend of this young fountain tells us that if a lock with initials of two people in love is placed in it, they will return together to the fountain and their love will be forever locked”.   The old fountain itself is not in great condition but clearly this fountain was designed especially for the purpose of Love Padlocks! 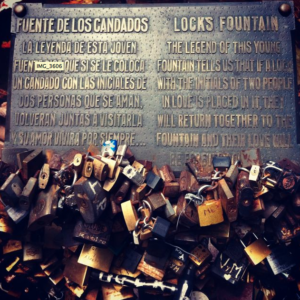 This is where we think the ancient custom of “locking Your Love” originated hundreds of years ago.  The Huangshan mountain is regarded as the most romantic . It is a UNESCO World Heritage site and sites high about pine forests and often above the clouds. Padlocks have been attached at many places along the mountainous trails, some parts very dangerous. According to the legend you could go all they way up the mountain and lock a padlock then toss your keys into the abyss, symbolizing your unbreakable bond. 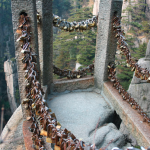 For years people have been putting padlocks on the internationally renowned “Love Bridge”. The bridge goes over the Seine river just behind Notre-Dame Cathedral so it is on a popular tourist route. In 2010 the city removed all the love locks in one fell swoop but they quickly began appearing again. Many of those locks that returned were dated with the original year the couple first came, so it is rumored that they now leave the locks due to the potential of repeat tourism. 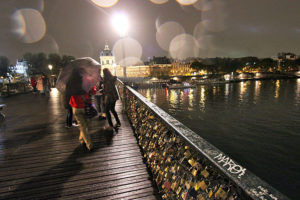